An expert in self-defense and martial arts has spent two sessions with our group over the last two months, teaching us some of the basics in each of these disciplines. 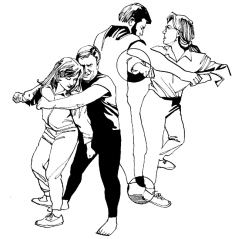 Both of our sessions started with an intensive warm up which was necessary after coming in from the freezing cold. There were lots of knees clicking and shoulders grinding as we limbered up!

After this, we learned and honed a variety of stances, punches and kicks (all in the air, rather than making contact, obviously!). It was at this point that we all wished we had a bigger space – as people’s legs and arms tended to come precariously close to the person in front – I am sure that you can imagine how the roundhouse kicks went!

From this, we started to discuss self-defense – when to use it and why it was needed, and then were shown four or five different moves to disable and defend against an attacker.  These proved really useful although quite difficult to master at first.  As it was pointed out, though, it doesn’t matter if we aren’t perfect on them, just as long as we could use the principles of them if we needed to.

Everyone in the group enjoyed both sessions and we learned a lot.  We will be linking members who want to continue their interest in this into other self-defense and martial art

s classes in the area.

I think I speak for everyone when I say that I was quite surprised to wake up the next day with very sore arms from the air punches that we were throwing – so it seems it was good exercise too!